Penitentiary Crayons: Part 2, My Sister from a Different Mister, and The Racial Quilt She Carries with Her…

“I think this is the spot,” I told Houston, so I could clear up any confusion. “Oooh, Yeah. So you’re coming here?” Houston said with excitement. “Well, not me but my son. But young sir, I believe you about to see me/ on the weekly/ at your L la ment-tree—/.”

And this is when I held my hand out, cueing Houston to finish my rhyme. As he moved his hand in position to give me a low five, with a slight smile on his face he uttered a hesitant, “Ssschool,” as he slap me five. Then I finished the rhyme as we headed for the cafeteria to conclude the tour. “Glad you approve/cause we no fools/ follow rules/ if tools in schools/ give knowledge deep as pools/ living life right yet nothing to prove.” And then I told Houston, “Hey man, you know I’m talking about a big swimming pool, not a baby pool; baby swimming pool your knowledge is not too deep!” He started giggling.

To say the least, Houston and I hit it off in a big way and that experience held a deep, positive influence compared to my interactions at the other school visits. Before the day closed I had met other students and teachers. I visited classrooms and spoke with the school principal, who was also cool. But it was Houston who held the key. It wasn’t just that we could reenact the trade-off rhyme style of RUN DMC, even though that did help, but it was the fact that Houston made it to the sixth grade with his spirit intact. My wife and I needed a school where our son could maintain the unique and beautiful spirit he was born with, and this six grader, named Houston, helped me see that was possible in this environment.

So we filled out our application and selected Houston’s school as our top choice and we got it. Now we just had to wait for the new school year to begin. As we approached the start of the school year three changes occurred. 1) Houston moved to Houston, Texas. So my role model never got a chance to meet my son and vice versa. 2) In the tradition of musical school personnel, the cool principal was moved to a new school because of all of his good work. And 3) After 30 years of exemplary service, the kindergarten teacher that was about to take part in my son’s education, retired. In her place we got a new, young, fresh out of college, white, female, kindergarten teacher. In spite of all the changes, we had made our decision so we were going to stay the course.

When it comes to humanity I am innately unconditional in my love of all inhabitants of this world, both known and unknown. As well, I deeply understand Dr. Carter G. Woodson’s notion in his book, The MIS-EDUCATION OF THE NEGRO, when he says “there is no particular body of facts that Negro teachers can impart to children of their own race that may not be just as easily presented by persons of another race if they have the same attitude as Negro teachers.” And in the case of my son’s newly hired kindergarten teacher she deserved the benefit of the doubt, that she too holds the ability to teach anyone regardless of race.

“Deal with the situation as it is”

The innocence of raising a child brings a new sense of hope for your world. In spite of the profound impact race played in my daily experience I still held hope that my son’s innocence caused everyone involved to hit the reset button on how they viewed Black people. The emotional weight of wanting the best for your child comes early when you recognize they are totally dependent on you. So by the time my son reached kindergarten it was like one big relay race where we have done everything to prepare him for school, all the teacher has to do is not fumble the handoff and take him across the finish line. But as soon as you make the handoff you notice the teacher, who you gave the benefit of the doubt to, begins to run a different way. Actually, she is not just running the other way but playing an entirely different game. And that’s when Dr. Carter G. Woodson’s quote finishes; “there is no particular body of facts that Negro teachers can impart to children of their own race that may not be just as easily presented by persons of another race if they have the same attitude as Negro teachers; but in most cases tradition, race hate, segregation, and terrorism make such a thing impossible. The only thing to do in this case, then, is to deal with the situation as it is.” 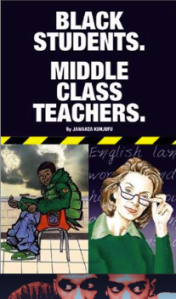 “Respecting the Reality can Preserve Your Sanity”

As a 33-year-old I still handed out my “racial” benefit of the doubt card. But now I needed to [deal with the situation as it] was and respect why the benefit of the doubt consistently served no benefit. There needed to be an appreciation for the educational, cultural, and lived experience of the largest formal education, teaching population that white, female teachers made up. Because this was the beginning of a long relay race and each baton carrier after us ran in the same style, at the same speed and in the same direction.  I learned respecting the reality can preserve your sanity.

It seemed no matter the professional training or advancement of education the life experience and cultural background of a large number of young, white teachers seemed to compel them to frame Black families and children as empty vessels in need of intellectual and cultural cargo. It is not just their teaching style of curriculum (across the board everyone should have their own style), but also the nature of how curriculum and instruction is interpreted and imparted from a racial standpoint of whiteness being the universal norm. The nvizabo belief that in addition to lesson plans If we simply pass on our mores and folkways these Black families will be more culturally competent to fit on the assembly line of progress.

The teacher’s age factor is also critical; the kindergarten teacher we just missed had 30 years experience, she could have been my kindergarten teacher, during a period of time when at least 70 percent of black children came from a two-parent household. This doesn’t negate the very public racial tensions of both the 1960’s and 70’s but it suggests that this white teacher’s racial beliefs would have found more challenges to such an assertion that Black children are products of an inept race during a time period of Black Mother, Black love, Black unity, Black family, BLACK FATHER, and a movement of Black urban professionals (Buppies) with the main goal of dispelling ineptitude. For our new teacher we unfortunately couldn’t even hope that her degree in education and pre-service teacher training would have even partially unstitched the threads woven into her racial quilt that patterned images, founded on the beliefs that white citizens are predisposed to leadership, intelligence, goodwill, a strong work-ethic, and a naturally positive duty to community & country, while at the same time patterning the exact opposite patches in the quilts of Black families and their community.

“the blanket is always a part of the activity”

It’s like the beloved Charlie Brown character named Linus and his security blanket. No matter where Linus goes and what he does the blanket is always a part of the activity. Many of the white teachers in both my son’s and my own schooling experience have demonstrated a similar behavior. It is not a matter of them being kind, well prepared, organized, good intentioned or credentialed, but more so too many carry a racial quilt that sits at the forefront of their delivery of curriculum, instruction and parent interaction. Quilts are beautiful, warm, comforting and hold personal significance for the families they emerge from, but certain patterns and images are not to be placed over the bodies and communities of Black families.

We would experience our new teacher’s quilt the hard way. After about a week of getting the hang of our new teacher’s homework assignments, our first year teacher’s [instructional] quilt almost smothered the imagination and confidence right out of my son.